We are going to Kalinpong for New Years. It is going to be freezing, so I have crocheted Sufi a coat. I couldn't get really thick wool so doubled 4 ply to make it 8 ply! The wool is from Shillong, and beautifully soft. The patter id off the net, and I still marvel at the generosity of people to share so much. I found these buttons in my collection of buttons, which goes back many many years, especially as these includes Thai's collection! 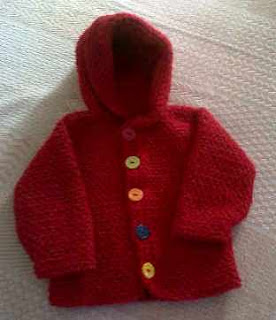 Suz's block finally arrived. I was so delighted that it hadn't got lost like her earlier one! The block was in pinks and Suz said she wanted garden visitors! I pondered on this for quite a long time and then decided to create a magic garden! I think it was all the pinks in the block that made me think of magic! I have used crochet a lot! I spent some time on the net looking at flowers of different kinds and visualizing how I would crochet them. 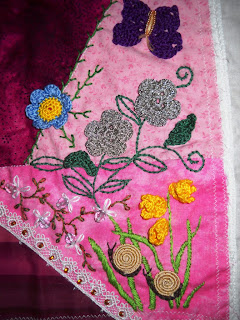 I started by making the silver flowers and then the blue one with the yellow center. 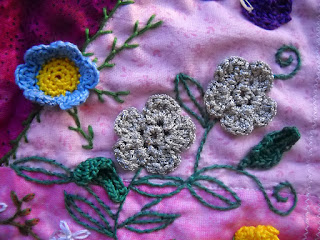 I made bright yellow buttercups and embroidered on the white flowers with a simple lazydazy stitch and the clear bead as a center. 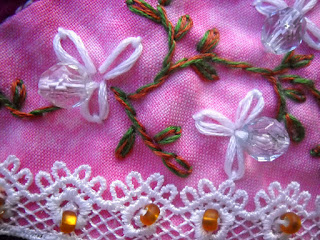 Since the theme was garden visitors,  I made a purple butterfly and the snails with a golden fleck! Its all Magic!!! 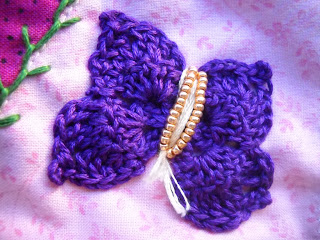 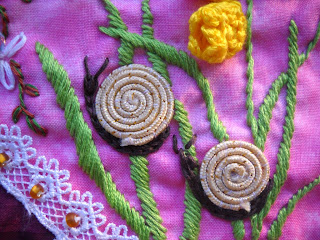 I added beads to embelish my work and add to the picture. I normally work on my patchwork only with a variety of stitches, and this is the first time that I have used beads, lace and crochet!
So this is how the block looks now before I send it on to Kim to do her bit and then send it back to Suzi to complete! 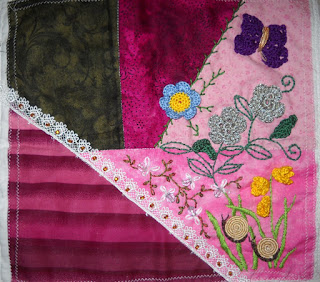 Kim's block finally arrived with Susan's work on it. The picture at the center is that of her mother and the beaded lace piece and pleated flounce came  from Kim's wedding veil. It is a very special block and Susan has added so much to it to make it really unique 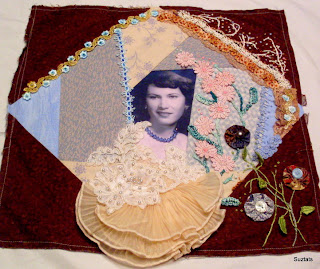 I thought about what I should do to continue to complement what had already been done. I decided to stick to the same colours, but introduce a little red since it is such an auspicious colour in India. I have never used beads or lace before, but decided to try to keep the continuity. So here is the finished piece 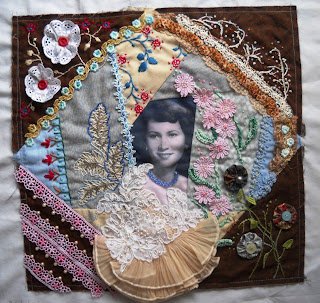 Kim's work on my block

The theme for my block is a garden. Kim has just done her bit on my block and I am delighted with it. She has posted a picture in SS and I am putting it here! Kim has put so much effort into it, I am really touched. Thanks Kim! What a wonderful way to get to know people, and make friends. The butterfly is perfect, and the ants so real! I find spider webs fascinating, so how amazing that I have one on my block! I am dying to see what Susan does to it before I get it back! 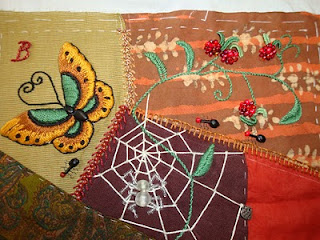 Participating in a Round Robin!

My friends in Stitchin Fingers ( http://stitchinfingers.ning.com/) have started a round robin with a crazy patchwork block! The idea is that we will all make a block and then send it to the next person on the RR who will embellish it and send it on to the next and finally it will come back to me! Since there are only 3 of us in our group, it shouldn't take too much time for the block to come back to me!!! Ofcourse we expect the posts to behave! Kim is from Texas, Susan from Canada and I am from India! My block to Kim has reached and I am waiting for mine to arrive from Susan!
This is my block 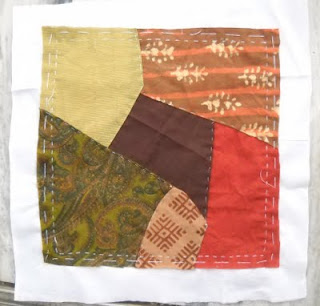 I chose earth colours as I want it to become a garden!!!! lets see what my team mates do!
Posted by brincrish at 8:15 AM 1 comment:

I made two of these little octopus finger puppets for my 2 grand nephews....Took an hour each. I really want to thank all the wonderful people who so generously share patterns on the net....complete strangers, but one feels such a connect....Thanks to all those generous souls! Now they want a lobster each!!!! 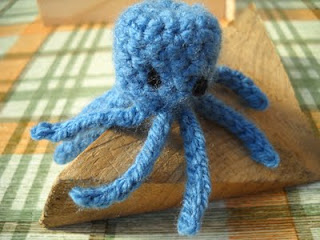 Finally the bedspread for Tash and Suj is ready! They will get it tomorrow and I hope will love it as much as I have done putting it together! 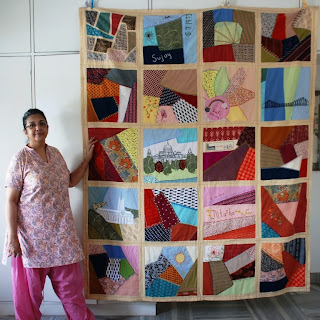 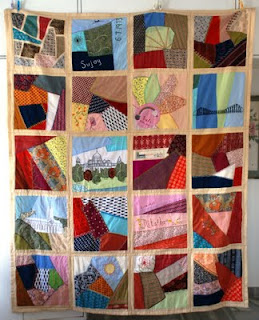 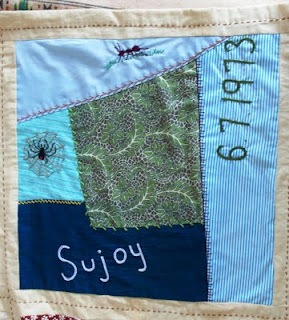 I loved putting in the spider for Sujoy since he so loves creepy crawlies!!!! Not to mention the ant on top!
I am excited about finishing this, and already have ideas for the next one!
Posted by brincrish at 5:25 AM 11 comments: 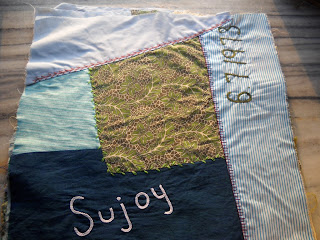 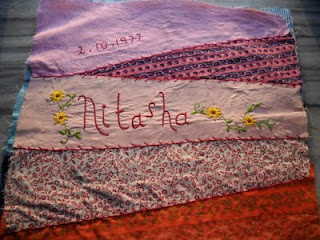 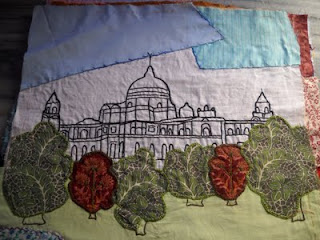 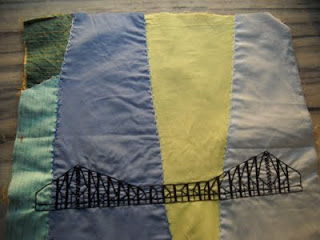 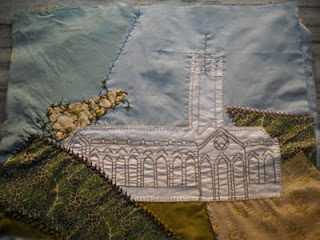 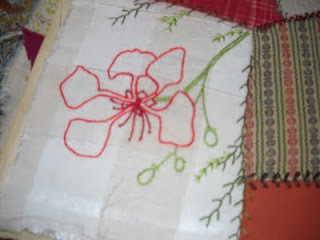 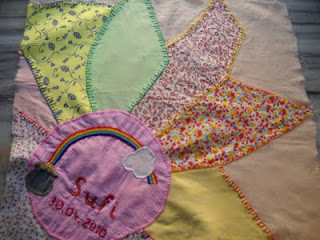 Its amazing how much 'needlework associated' stuff I have collected over the years. I was a great fan of Women's Weekly and subscribed to it for so many years! This was a pattern that came with one of the issues in 1980. I must have wanted to make it for one of my girls, but didn't ...... 31 years later I have made it for Sufi as a present for her Baptism! 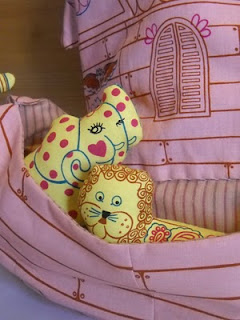 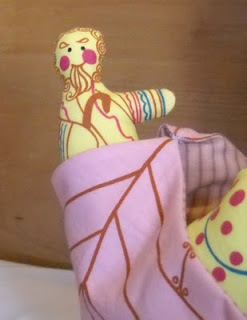 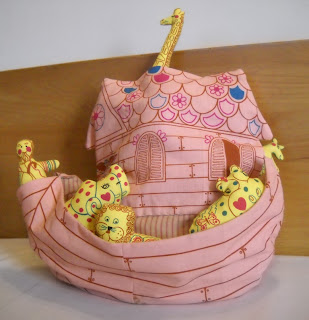 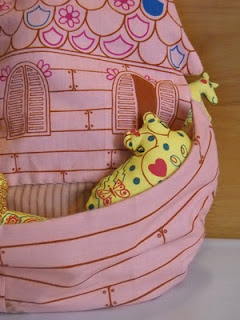 Its a cushion for her bed with pockets for all the little stuffed toys and Noah himself!!! I haven't made a stuffed toy for a very long time, so it was fun, much tougher than I thought!
Posted by brincrish at 9:38 PM 5 comments: